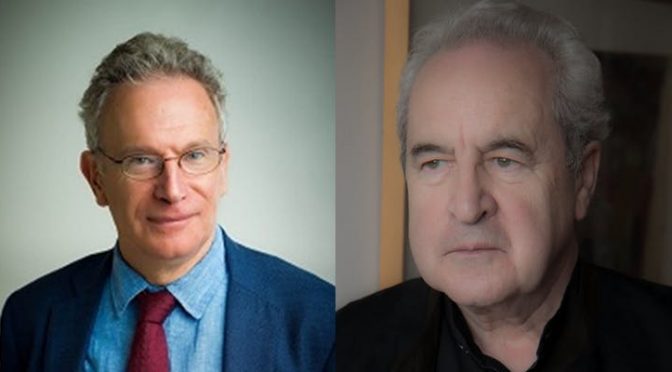 Is literature always political? Does the writer have more political responsibility than other citizens, or less? What was the role of Irish literature in creating a national identity, and what is it now, in the age of Brexit? Here two of Ireland’s finest writers, the novelist John Banville and the journalist and critic Fintan O’Toole, will tussle their way across these questions.

This event is a collaboration between the Centre for Modern Literature and Culture and the European Research Council funded Beyond Enemy Lines project. It will be followed by a drinks reception.

Fintan O’Toole is a columnist for The Irish Times and winner in 2017 of the Orwell Prize and The European Press Prize. He teaches in Princeton. His latest book (November 2018) is Brexit: The Politics of Pain.

John Banville’s novels include The Sea, The Infinities and, most recenlty, Mrs Osmond. He is also a playwright, a screen writer and a book reviewer. He won the 2005 Man Booker Prize for The Sea. He has also received the Prince of Asturias Award, the Austrian State Prize for Literature, and the Franz Kafka Prize. He lives in Dublin.